Economic and real estate update for the month of August, 2020 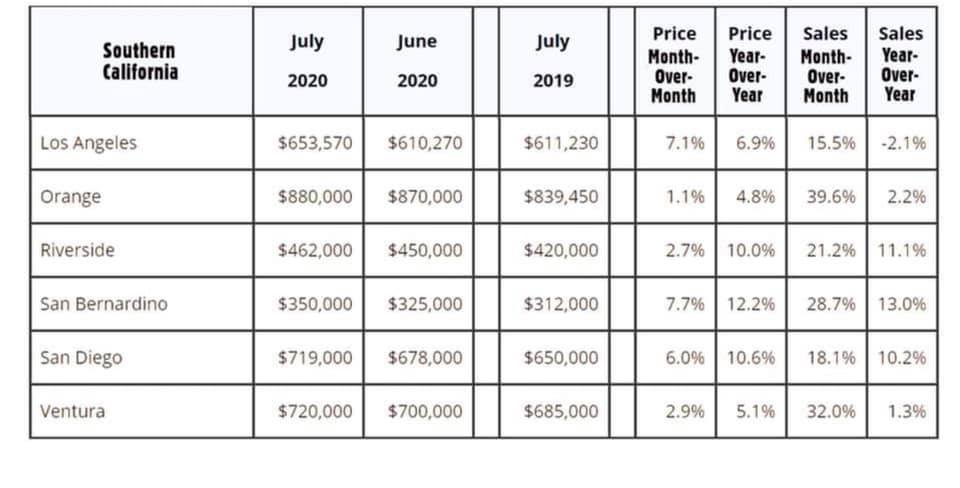 Real estate update for August 2020 in California home sales market. The graph above indicates results from Southern California by County.

The U.S. economy added 1.76 million jobs in July – The Department of Labor Statistics reported that 1.76 million jobs were added in July. Although this exceeded expert’ expectations, it marked a dramatic decline from the pace of new and rehired workers in May and June when 7.5 million jobs were added in two months. This added some concern that the rising Coronavirus may be stalling the jobs‘ recovery. The unemployment rate fell to 10.2% in July from 11.1% in June. In the past three months, 9.3 million workers were either rehired or found new jobs. There are still 12.9 million more unemployed workers than there were in February when the unemployment rate was 3.5%. August numbers will be released next Friday and will be included in my weekly update on Saturday.

Home sales figures are released in the third week of the month for the previous month. These are July’s results.

California’s existing-housing sales recorded record results in July – The California Association of Realtors announced that existing, single-family home sales in July totaled 437,890 on a seasonally adjusted annualized rate. That marked a staggering month-over-month increase of 28.8% from the number of sales in June. Year-over-year sales were up 6.6% from July 2019.
July 2019 had a pretty healthy sales rate, so a 6.6% increase is remarkable considering that we are in the middle of a pandemic. Existing-home sales are recorded sales. These represent homes that went under contract mostly in May and June. The state-wide median price also hit a record high. It was $666,320. That marked a6.4% increase month-over-month from June, and a 9.6% increase year-over-year from July 2019. The median price is the point at which one half the homes sell for more and one half sell for less. Historic low-interest rates with 30-year fixed at or under 3% combined with tight inventory levels have pushed prices up. The unsold inventory index in July dropped to a 2.1-month supply of housing from a 3.2-month supply one year ago. The index indicates the number of months it would take to sell the supply of homes on the market at the current rate of sales. The graph below indicates the number of sales and median prices for counties in Southern California.

If you are interested in selling homes in Calabasas, West Hills and Woodland Hills, please contact David at 818-421-2170